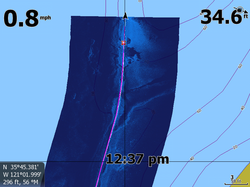 Click on picture of a larger view
I purchased a new HDS 10 Gen 2 matched up with the LSS-2 HD and got out last weekend for the first time to look at the improved speed of the unit. The Chart will refresh as fast as you can drive your boat. I was going 55 MPH and the Chart map was on the screen the whole time and my trail was current. Lowrance has added overlay of the Structure Scan image onto the Chart map. They have named this feature "Structure Map" as seen in the screenshot to the left. We can analyze the contour lines on a map and figure out where a point is or in the case of this picture a point at the top of the picture and a creek coming into the main channel from the right. With the overlay of the Structure Scan image you can see the rocks on the point and how the creek channel enters the main channel. With this feature you can overlay the bottom makeup over the map and see if an underwater point may have rocks, brush or possibly a submerged tree on it. Now we can look underwater and figure out the best angles to fish structure, saving time and tackle. We used to drag a jig through an area to "feel" what was down there. Now we can actually see what's there and increase our success. 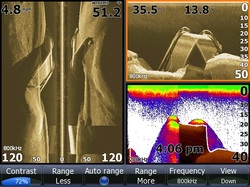 Click on picture for a larger view
This bridge is on Lake Shasta. It was flooded when the Dam was built and offers unique structure to fish. Lowrance's Structure Scan gives a great picture of the detail of the bridge. This is a great tool that we have not had before. Especially check out the traditional sonar screen and it's hard to figure out what that blob is. When you compare to the downview of the Structure Scan it's easily explained. The beauty of the Structure Scan is it ability to help you understand what you are seeing on the Sonar side.

Fish on the guardrail of the bridge at Shasta 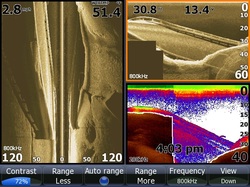 Earthmover tires in a lake for structure 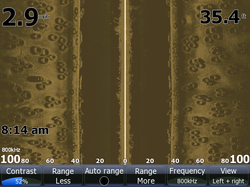 Click on picture for a larger view
These are 5 foot tall earthmover tires that the contractor left on a flat in New Melones Lake in California. These tires cover about 2 acres of a large flat. Unique structure and Lowrance's Structure Scan shows these tires unlike any conventional sonar ever could and with detail that I've never seen before. 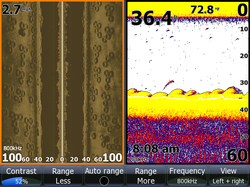 Click on picture for a larger view
Here is a screenshot of the earthmover tires along side a 2D sonar pane. You can see that without Lowrance's Structure Scan the tires just look like large rocks on the bottom. The ability to see and figure a plan of attack on structure with this kind of detail can prove to be invaluable over time, especially if you fish tournaments.

Bait on Structure Scan with bass below the bait 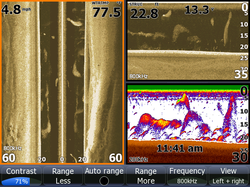 Click on picture for a larger view
In this screenshot you can see the fish below the schools of shad. Something to pay attention to here is the fact that the shad schools are in halfmoon shapes and long elongated schools with bass below the bait. Whenever you see bait in odd shaped schools it is because a predator fish is feeding on the bait. When fish feed on bait the school will try to avoid the fish and these odd shaped schools of bait are evidence of active feeding fish. Drop you lure right away! 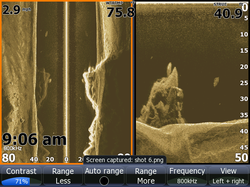 Click on picture for a larger view
Lake Nacimiento has alot of rock structure. Here a school of bait is relating to the top of a rock in just the right depth to hit with a deep diving Fat Free Shad on 10 Lb. Silver Thread Flourocarbon. If the bait is on the rock and you get that crankbait to glance off the top of that rock there is a good chance a bass won't be able to resist that presentation.