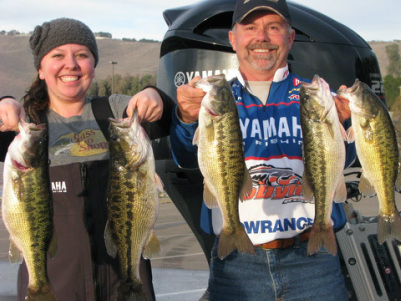 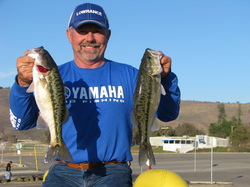 Dan Frazier and I fished the second Anglers Choice Team tournament of the 2011/2012 season. This tournament was held on Nacimiento Lake. This is can be a good time of the year to fish for spotted bass or a you can find tough conditions like we had in the Western Classic just last weekend. I had 9.13 pounds on Nacimiento last Sunday the second day of the Classic and finished in 5th place in the Pro division. In this Anglers Choice tournament my partner and I had 11.63 pounds and finished in second place just six days later. In fall the bite can change rather quickly as I experienced this past week. The YUM Dinger proved to be the best bait to throw and I committed to that bait in the Anglers Choice tournament to my advantage. Congratulations to Bryan and Steve Grier for a great tournament, below is the reason why we finished in second place in this tournament. 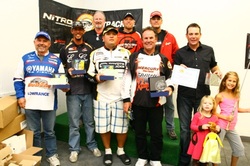 Here is a picture of the Western Outdoor News, WON Bass Pro/Am Western Classic Championship top five. I ended up in 5th place, that's me on the far left. Go to TOURNAMENT STORIES to read about my experiences during this Pro Championship. 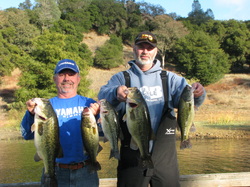 Jim Slusher, owner of Jim's Pro Bass Tackle in Paso Robles and I fish the American Bass Association's team tournaments in the Pacific Coast Region. The first tournament of the 2011/2012 season was held on Santa Margarita Lake on November 12, 2011. This is the winning limit of bass that weighed 17.50 pounds. The largest bass was caught on a swimbait on the third cast of the morning, a great way to start a tournament! We worked very hard the rest of the day to complete the limit to take full advantage of that big bass. The bite was slow for the most part and we caught the fifth fish about 12:30 in the afternoon. The most exciting part of this particular tournament was that on the last cast of the day, Jim tossed his wacky rigged YUM Dinger on a steep rocky point and let it sink all the way to the bottom in 22 feet of water. He made a comment to me that he could feel the bottom as he gently lifted the bait off the bottom and let it fall on his Dobyns 743s spinning rod. On about the third drop to the bottom Jim yelled "get the net, Dude" and the fight was on. A couple gently coached minutes later he slid the nice 5 pounder into the net and we culled the smallest bass out of the livewell which was about 1.25 pounds and proceeded to the weighin. To catch a second "kicker" on the last cast of the day that won the tournament was a memorable event to say the least. YUM baits were the key to this limit of bass. 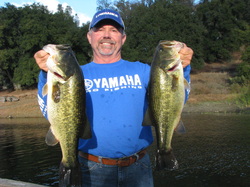 Santa Margarita Lake is a relatively small lake with lots of weeds in the summer, tules and water to 100 feet deep near the log boom. The bass from this lake are very good looking fish with deep colors indicating that they have been living in the shallow weedy areas most of the summer.  One of these fell for the swimbait and the other was caught on the YUM Dinger in 22 feet of water with just a few minutes left in the tournament.

Make it a priority to serve others 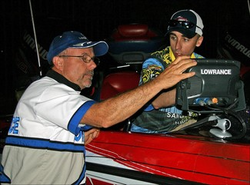 Here I am helping one of the contestants in FLW's College Fishing tournaments. I think helping our children and young adults share in the excitement and see the opportunities available in this great sport are some of the most important experiences we can share. 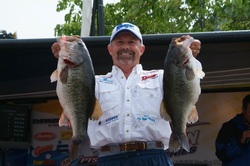 Click on picture for FLW news report
In April of 2007 I decided to enter my first actual Pro level tournament and fished the FLW Everstart tournament at Clear Lake. Spring on Clear Lake can be some of the best fishing any bass fisherman can experience. In April there are fish on beds, post spawn fish and pre spawn fish all swimming around at the same time. A wide array of techniques can be successful on this lake during the magical month of April. On this magical day a skirted football jig with a YUM twin tail trailer was the key to my success. These two bass were part of the largest single day weight that I have caught to date. The first day of my first bass tournament as a "Pro" was memorable. I weighed in 27 pounds 5 ounces and was in third place. The largest bass of these two weighed 9 pounds 5 ounces. The other one is close to 8 pounds. 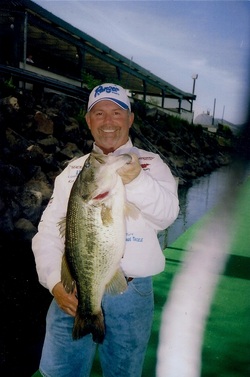 This bass anchored a 24 pound limit the third day of my first Pro tournament. In the picture above I had 27 pounds the first day and was in third place. The second day the weather changed and I did not adjust so I only weighed in 12 pounds and dropped to twenty sixth place. I thought about the weather change and adapted the techniques I was employing and the third day I fished the same five spots that produced the big bag the first day and jumped up to twelfth place just 8 ounces out of the top ten cut that fish the final championship day in the FLW tournaments. This bass was the kicker in my 24 pound limit on my last day of the tournament.  I learned alot about the decisions made during a tournament day and how much those decisions can effect the outcome. With the weather change I had to get away from the jig I used the first day and get a more subtle presentation. I went to a YUM Houdini worm and fished those same rock piles as I did the first day and the fish responded. Experience is almost always the best teacher. This big bass came off a rocky point that I found while moving from one spot to another. I was moving and traveling on pad but also watching my Lowrance HDS 10. The bottom was a consistent 35 feet deep but all of a sudden the bottom came up to about 14 feet deep. I used the trackback feature on my HDS unit and placed a Waypoint on the shallow spot behind me. I switched my page to GPS and navigated back to the Waypoint and found a place that yielded this bass and other tournament big bass since up to 5 pounds.

Tip: Always watch your electronics when you change locations, you may be driving over good fishing spots that you haven't found yet. 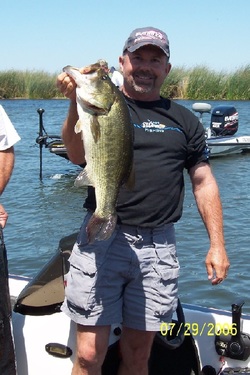 This s a 6 pound bass that was the largest bass of a winning limit in a small tournament on the California Delta. This was in July of 2006. I was pitching a 5 inch reaper in about 3 feet of water along tules on an outgoing tide. The California Delta is a unique waterway to fish for bass in. The water level fluctuates 5 to 6 feet every 5 hours or so. The current goes from slack to incoming to slack to outgoing. Trying to figure out what to use, reaction or plastics or where to go, from tule points, to weeds, to rip rap banks and all the combinations of weather, season, current conditions and more makes the Delta a very challenging place to bass fish.


You can also go to the fishing articles section of this web site and read the "Running The Tides" article to get a fuller picture of the how to fish the tidal movements on the Delta.

Prefishing for an FLW tournament at Havasu 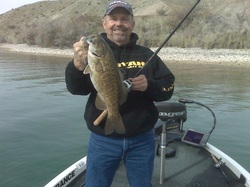 Here is a nice Smallmouth caught out of Lake Havasu in Arizona. I got this fish on a football head rigged with a YUM Gonzo grub. These fish were very spooky and the YUM scent that is in the plastic of the Gonzo  Grub was a real key to getting these fish to bite. 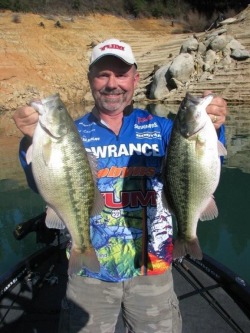 I went to Bullards Bar in California with Gary Souza for a day of fun fishing and we ended up with a 5 fish limit of Spotted Bass that weighed 21 lbs 12 ozs. These were my largest contribution to the limit, two Spots the largest at 5 lbs and the other at 4 lbs 8 ozs. I caught these bass out of 40 feet of water with a green pumpkin YUM Gonzo grub on a 1/2 oz football head. Late winter trip, the jig needed to be worked real slow in deep water, 40 feet plus, to get the big bites. 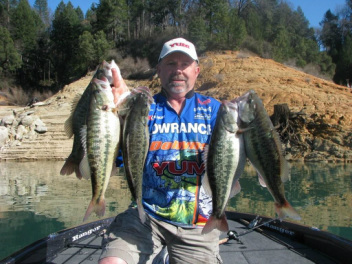 This is my best limit of spotted bass, unfortunately this was just a day of fun fishing, not a tournament. Bullards Bar reservoir has a large population of big spotted bass. It was great to experience this fishery before it got really famous. These fish were caught in February of 2010.